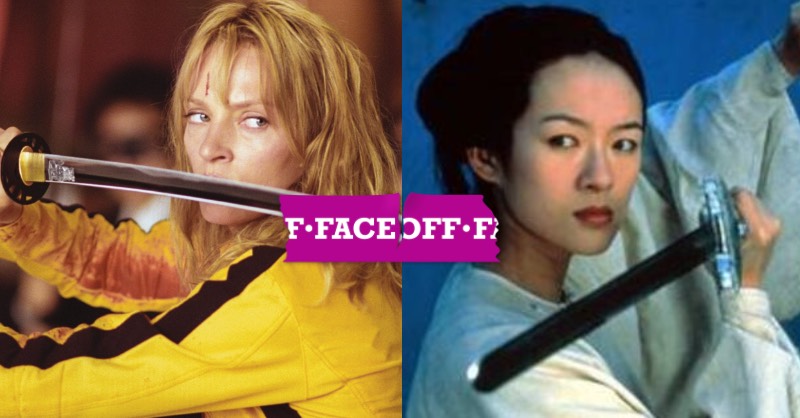 Martial art movies are filled with memorable male characters portrayed by macho actors like Bruce Lee, Chuck Norris, Jean-Claude Van Damme, Steven Seagal, Jet Li, and many more. Indeed, it is a male-dominated genre. But, some female actresses have proved that it doesn’t take a ‘Y chromosome’ to be an action star. Actually, some of the best martial arts films of all time are led by strong women, who can really jump-kick ass.

Here are two of our favorite female cinematic heroines, The Bride vs Jen Yu: Who is The ultimate swordswoman?

“It’s mercy, compassion, and forgiveness I lack. Not rationality”.

In 2003 Quentin Tarantino released the first out of two volumes of his stylish Kill Bill films. The film introduced us to badass swordswoman Beatrix Kiddo, a former female assassin who goes on a roaring rampage of revenge against the members of the Deadly Viper Assassination Squad who left her for dead.

AKA “The Bride” and “Black Mamba”, Kiddo uses every skill she learned under the cruel tutelage of the legendary martial arts master Pai Mei to kill the assassination team members. One by one, and to slay any of their subordinates who stands in her way.

Armed with a sword crafted especially for her by the famous swordsmith Hattori Hanzō, she cuts through an army of Yakuza fighters. Some of the world’s top assassins. The Bride was trained in some of the most secret and deadliest blows in all of the martial arts. Including the Three Inch Punch, the Five Point Palm Exploding Heart Technique and she can pluck an eyeball out of its socket. Combined with her ability to force her body to recover from injuries and her exceptional determination, Kiddo makes an unbeatable warrior.

It seems like every one of Kiddo’s deadly techniques, such as eye plucking and exploding hearts, requires close contact, so she would have to close that gap or these moves can be blocked.
Bill, her ex-boss and lover, managed to track Kiddo down when she escaped and put a bullet in her head. Although it is clear that Bill is a top tracker, it still proves that Kiddo isn’t as good at covering her tracks as you’d expect.

Kiddo’s main strategy seems to be “just run in and kill everyone who gets in my way.” It worked fine a couple of times, but when confronting Budd, one of the Deadly Viper Assassination Squad members, she ran into a shotgun firing rock salt into her chest and winded up buried alive at the bottom of a grave. So, it can be claimed that she is not a master strategist.

“Friendship isn’t real anyway. But how long would you last as my enemy?”

When Crouching Tiger, Hidden Dragon debuted in 2000, it shortly became an international success, largely thanks to its kicking aesthetic form and its unique eastern narrative content.

The story introduced us to Jen Yu, a young woman who first appears to be a compliant girl from a rich Manchurian family, but is soon revealed as the apprentice of an infamous murderess named Jade Fox. Jen Yu was trained by Jade Fox in the Wudang martial arts techniques and has been secretly reading the Wudang manual behind her illiterate master’s back to the point that she surpassed her fighting skills.

Having stolen the priceless “Green Destiny” sword from Li Mu Bai, a famous Wudang warrior monk, Jen Yu runs away and embarks on a life of adventures. AKA The Invincible Sword Fighting Goddess, Jen faces all sorts of opponents, but with the Green Destiny in her hand, no warrior seems to match her, as she can destroy any weapon raised against her using the Green Destiny. Even when Li Mu Bai tracks her down she refuses to relinquish the Green Destiny and dares to fight him for it.

Jen Yu’s has a real problem controlling her temper and it makes her do fundamental mistakes like turning down any offers to help her and hurting everyone close to her. Her anger interferes with her ability to fulfill her potential as a warrior and she seems to lack the philosophical aspects and self-control that proper Wudang warriors like Li Mu Bai and Yu Shu Lien exhibit. The way Li Mu Bai easily overpowered Jen Yu with a simple stick against her sword indicates that despite her tremendous potential Jen Yu still has a lot to learn about the Wudang way.

The Bride vs Jen Yu, Who is The ultimate Swordswoman?

By the time Kiddo’s tale of bloody revenge came to an end, dozens of bodies were piled up by the side of the road. We can’t imagine any martial arts movie hero, male or female, who would be happy to cross swords with her.

Jen Yu’s stubborn and fearless nature, as well as her obvious leaning toward the dark side, makes her a dreadful warrior but also leads to a tragic end.

The Bride vs Jen Yu Who Wins? Verdict

Who is our winner of this swordfight? Is it the ninja lady with the Hattori Hanzō Katana or the hotheaded girl holding “Green Destiny”? Watch the video and find out.

Check out below to see who we picked! Disagree? Want to share your rage? Comment below, or suggest your own face-off.