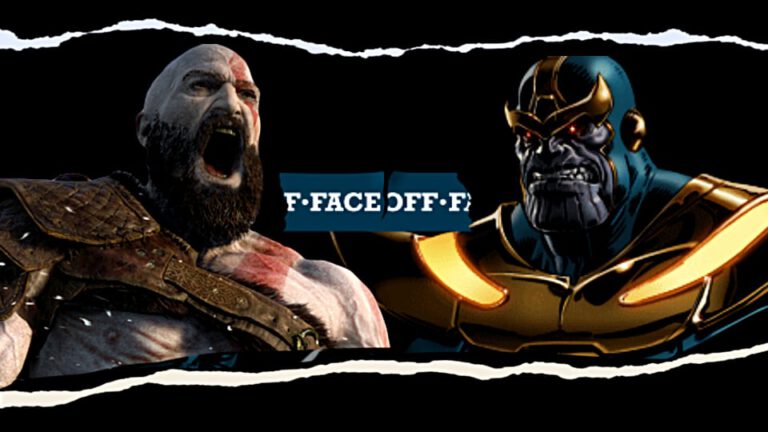 Thanos vs Kratos: The Ultimate Battle

Welcome to another Faceoff battle report! Today we feature a battle between two of fiction’s most brutal warriors: Thanos vs Kratos! Kratos, the God of War, is possibly the most badass video game character ever created. This rampaging unstoppable beast has practically annihilated all of the Greek Pantheon of gods before he went on to challenge the Nordic gods.

Thanos, the Mad Titan, has been an essential figure in the Marvel Universe for years and probably the most feared villain in the MCU. During his unbridled rule, he has leveled worlds and even universes, to the point that with one click of his fingers he wiped out 50 percent of sentient life in the galaxy. Certainly, the power levels in this fight are almost incalculable. But that’s just more reason for us to try and break it down to fine points and come up with a winner. So, without further ado let’s get started with this extravaganza of brute force.

So, which one of these heavyweights will win in a fight? With several parameters in mind for each of them, let’s first examine how powerful is Thaos compared to Kratos.

How powerful is Kratos?

The main protagonist of the God of War game series, Kratos is a demigod son of Zeus and a mortal woman. Unaware of who his father was for most of his life, Kratos became a fierce warrior in the Spartan army and later a renowned Spartan General.

However, when Kratos and his army were defeated by the merciless Barbarian tribes, Kratos called to Ares the God of War and pledged his allegiance in exchange for victory. He became Ares’ faithful servant, up until he killed his own wife and daughter under Ares’ command. Kratos renounced his service to Ares and later killed Ares and ascended to Godhood. Then, he set out to exact revenge against the Olympian gods.

Kratos is easily one of the most powerful beings in all of fiction. As a demigod, he has super strength, speed, durability, and a healing factor he can use at will. He has killed dozens of monsters and gods of Greek mythology. In fact, he has killed most of the gods of Greek mythology, including Poseidon the god of the sea, Hades the god of the underworld, Hercules, and even Zeus, the king of the gods and the strongest god.

See also: The Legendary Warriors of Sparta: Leonidas vs Kratos

Amongst his feats of strength, he counts the following: Killed Cronos, King of the Titans, and the creator of time, who was 1600 feet tall. During the fight, Kratos was able to resist the attacks of Cronos and even pushed his hands back, which means he applied a force of more than a 165million tonnes.

He has defeated Baldur, who was able to knock out in 3 punches the World Serpent, a snake big enough to circle the world. The same World Serpent who fought with Thor and endured a hit that send him way back to the past.  In a pushing match with Baldur, their battle causes a crater in a cliff. When Atlas the Titan tried to fight Kratos and squish him, Kratos repelled the attack and held off Atlas. This is the same Atlas who held up the world for many years, without showing any sign of tiring.

How powerful is Thanos?

Even without the Infinity Gauntlet, Thanos is still one of the most powerful beings in the universe. Thanos is an Eternal, an evolutionary branch of humanity skilled with many inherent superpowers. Also, because of his Deviant-mutated genes, Thanos was born with an extremely massive body and nearly invulnerable skin.

So much, so that in all of his fights, his body shows only a few signs of damage. Because of his mutation, he also has the ability to synthesize cosmic energy for his own use. His mind is also invulnerable to most forms of psychic attack and can project a psionic blast of energy as well as blasts of plasma/cosmic energy from his eyes and hands.

When Thanos punched Iron Man in the face he shattered pieces of his best armor. Without any infinity stones, Thanos could handle Iron Man, Thor, and Captain America, all at once. He deflected Mjolnir and sent it crashing with so much force, that it rendered Iron Man out of the fight. Let’s see how many powerful feats Thanos underwent without the Infinity Stones in his hand.

He was able to beat the living crap out of Hulk with his own brute strength. And this is the same Hulk who was able to one-shot Hulkbuster, Thor, Ultron, Surtur, and Abomination. He easily crushed the Tesseract with one hand. And the Tesseract can withstand being heated to 120 000 000 Kelvin, making the feat up to Large Country Level. Squeezing the Tesseract to dust required a force equal to 42,000 tons!

He beat up the powerful Silver Surfer, a being who easily defeated Thor! He even held his own against Odin, who is a multiversal sky father, and gained Odin’s respect. In short, Thanos easily overpowers the Hulk and Thor in the comics without the infinity gauntlet.

See Also: Doomsday vs Hulk: Battle Of The Beasts

Thanos vs Kratos Round 1: Strength

In his fight against Cronos, Kratos catches Cronos’ hand when he tried to crush him with a clap. Cronos is at least 450 times bigger than a human, which would make Cronos over 1600 feet tall and over 7 million metric tons in weight.

Therefore, his hand weighed about 72,900 tons and he was moving it at great speed. It is safe to say that the impact Kratos blocked was having a force of 164,895,426,000 Newtons. Mind you, Kratos not only stopped the hand but also pushed it back, so his strength must be greater than that. WOW.

Thanos is also among the most impressive physical beings in the universe. He once tanked blasts from All-Father Odin and Silver Surfer simultaneously. Famously tackled his Phoenix Force-possessed son, Thane, so hard they went through a planet causing it to explode. Thanos knocked Galactus off his feet. And Galactus is a cosmic being who ate planets for breakfast. Even Ego the Living Planet attempted to best Thanos by physical force and failed and was in fear and panic.

However, although Thanos is stronger than any of Earth’s 100-ton-plus range heroes, such as Thor, Namor, Hercules, and even the Hulk, we just don’t see him quite as strong as to push a bridge that weighs more than a million tons as Kratos did. Just like Hercules, who is also a son of Zeus and a mortal mother, Kratos is depicted as absurdly strong, able to unimaginable strength feats. Hence, this round goes to Kratos.

Thanos vs Kratos Round 2: Intellect

Let’s start off by saying that Kratos is much more than the dumb raging beast that he is sometimes depicted to be. Kratos is highly intelligent! And he’s been that way since the very first video game, constantly solving puzzles that are supposed to be impossible even for a god.

He was able to find his way out of Daedalus’s labyrinth, which no one has been able to do. Also, he keeps coming up with incredibly creative ways to defeat extremely powerful beings. He became a General in the Spartan army which means that he had one of the finest tactical minds in a famously military-based culture. That status alone should tell you how smart he is.

In God of War 4, he was able to figure out how to get to the chisel that was under the thick ice. Neither Mimir, who is a genius nor Atreus, were able to come up with a plan of their own. However, Thanos has unmistakable genius-level intelligence! He has planned a massive universal conspiracy to get the Infinity Stones and scrap half of the universe’s population. And succeeded!

He has built and maintained an interplanetary empire and successfully prosecuted several major wars. Thanos has created the time machine, invented a stasis chamber that can keep people a microsecond away from reality, created planet-busting weapon systems, his tech chair, and hacked Galactus tech, twice. Thanos is a genius roughly on par with Doctor Doom and this round definitely belongs to him. Nothing that Kratos has done can suggest he is capable of such intellectual strategic and high tech achievements.

Thanos vs Kratos Round 3: Fighting Skills

The best demonstration of Thanos’ fighting skills was best demonstrated in the MCU. He pounded Awakened Thor-wielding Stormbreaker. He defeated Ironman in his latest nanotechnology suit. Finally, he overpowered Captain America wielding Mjolnir with the powers of Thor without breaking a sweat. Cap did better than Ironman who got knocked out about 45 seconds into the flight. Thor got the brunt of the beat down because Thanos knew Thor wasn’t a match for him.

Thor was by far the most powerful of the three. Cap had a brief moment when he summoned Mjolnir and smacked Thanos with a perfect hit under the chin and hit him with insane amounts of lightning but didn’t have much effect on almighty Thanos. No doubt Thanos is a fearful hand-to-hand warrior, having been taught the arts of battle while on planet Titan.

Thanos is particularly adept at using a combination of his physical might and energy manipulative abilities during combat. He is also a skilled swordfighter, being able to overwhelm a Mjolnir-wielding Silver Surfer. Kratos was born and raised in Sparta which automatically makes him a fierce warrior, as the Spartans were fierce warriors feared in Greece, trained since birth.

At one point, Kratos became the leader of Sparta so it should mean he was the best of them and indeed he has bested Sparta’s greatest warriors. Originally a brawler who used basic strength, Kratos has since developed into more of a rounded, technical warrior and martial artist. The fact Kratos defeated the Greek pantheon that consisted entirely of battle-hardened gods should speak for itself.

Even without his Godly strength, Kratos would still be a tough opponent based on his years of training in various martial arts from his childhood. Together with his strength and powers, he is almost unbeatable. All in all, we believe Kratos has better mastered the use of his limbs and various exotic weapons, making him the winner in this regard.

Thanos vs Kratos Who Wins? Verdict

So, after all, three rounds the score is 13:12, and Kratos wins! As you can see, this battle is a close one. However, Thanos’ intellectual advantage will hardly do him any good in this kind of direct physical clash. The thing is that Kratos is a god-killer who has been in the business of deity extermination since the Bronze Age!

However powerful, Thanos would most likely be just another titan in a long line of beings who met their end at the hands of the Ghost of Sparta. Thanos has many amazing feats, but it simply does not compare to Kratos MURDERING ALL THE OLYMPIANS. In the cosmic Marvel hierarchy, Thanos without the Infinity Gauntlet may be equal to the likes of Zeus. Kratos has killed Zeus with his bare hands in the God of War universe, and there is no reason to believe that Marvel Zeus is stronger than GOW Zeus.   Kratos’ strength, fighting skills, and speed are greater than Thanos’ and should be enough to defeat The Mad Titan.

A musician and film buff. I'm a Film graduate of The Sam Spiegel Film and T.V. School program. Creative writing by nature, a very curious girl, exploring all geek fandom.
All Posts