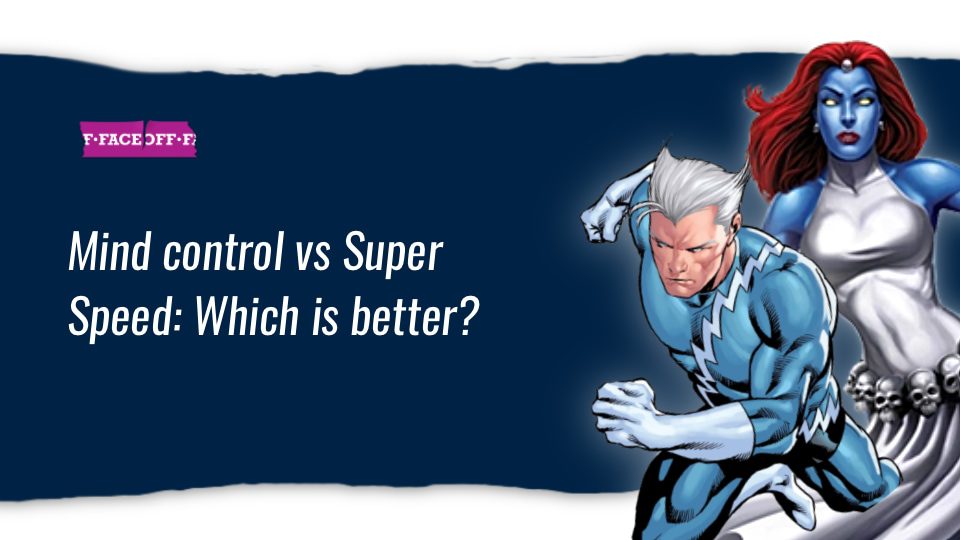 Have you been wondering what superpower you’d like to have? The question of mind control versus super speed has been debated for years and it can be hard to decide which power is best. Both would give you incredible abilities and the potential to do some amazing things, but which one would really be the most powerful? In this battle report, we will explore both mind control and super speed, their various pros, and cons, and discuss which superpower would be more advantageous in different scenarios. Keep reading to learn more about what each power could do for you and how it could benefit your life!

Mind control power is a popular ability in comic books and movies. The most famous mind control superpower is probably Professor Xavier’s from the X-Men. Xavier is a telepathic mutant who can read and control minds. He is the founder of the X-Men, and his abilities have made him one of the most powerful mutants in the world.

Emma Frost (X-Men): Emma is a telepathic mutant who can read and control minds. She is a member of the X-Men, and her abilities make her one of the most powerful mutants in the world.

Raven Darkholme/Mystique (X-Men): Raven Darkholme is a shape-shifter who can assume the form of any person she has touched. She also has limited telepathic abilities, which she uses to control those around her. Mystique is one of the most dangerous villains in the Marvel Universe, and her ability to shape-shift makes her nearly impossible to defeat.

Another well-known mind-control superhero is Jean Grey, also known as Marvel Girl or Phoenix. She is a telekinetic and telepathic mutant who can read, control, and manipulate minds. She is one of the most powerful mutants in the world, and her abilities make her a fearsome opponent.

Other less well-known mind-control superheroes include Mesmero, who can hypnotize people; Psi, who can read and project thoughts; Karma, who can take over someone’s body if she makes eye contact with them; and Rachel Summers, who can read minds and project her own thoughts into others’ heads.

These are just some of the more famous examples of mind control powers in pop culture. There are many other characters with this ability, including some villains. Mind control is a popular superpower because it allows the character to be in complete control of the situation and the people around them. It’s a power that is both feared and respected.

There are pros and cons to having either mind control or super speed as a superpower. Speedsters would allow you to get from place to place quickly and easily. You could also use your speed to outrun dangerous situations or people. However, mind control would give you the ability to influence other people and perhaps even control them completely. You could use this power for good or for evil, depending on your moral compass. Ultimately, it is up to the individual to decide whether or not they would want either of these superpowers.

There are a few different superheroes who have super speed. The most well-known is probably the Flash, whose real name is Barry Allen. He’s a member of the Justice League and he’s able to run at speeds up to the speed of light. Another superhero with super speed is Quicksilver, who is a mutant and a member of the X-Men. He can run at speeds up to Mach 10, which is about 7,000 miles per hour. There are also a few other superheroes who have super speed, but those are the two most well-known.

Some people argue that mind control is a good superpower because it could be used to stop crime. If someone with this ability could read minds and know when someone was about to commit a crime, they could stop them before they acted on their impulse. Additionally, mind control could be used to influence people’s thoughts and actions in a positive way. For example, a person with this ability could use it to make people more empathetic or help them overcome addictions.

On the other hand, others argue that mind control is a dangerous superpower because it could be easily abused. If someone with this ability wanted to harm others, they could easily manipulate them into doing their bidding. Additionally, even if someone with this ability had good intentions, they could unintentionally do more harm than good by meddling in people’s thoughts and emotions. For example, if someone tried to use their power to make someone fall in love with them, they could end up causing that person emotional distress if the feeling wasn’t reciprocated.

At the end of the day, whether or not mind control is a good superpower is up for debate. It depends on how it would be used and who would have this ability.

Mind control vs Super Speed: Which is better? Verdict

On the pro side, you could catch criminals, save people from danger, and get around quickly. On the con side, you could easily miss things, be constantly on the move, and exhaust yourself. The pros outweigh the cons, but it really depends on the person. If you’re someone who likes to be always on the go and doesn’t mind missing a few details here and there, then super speed could be a great superpower for you.

However, if you’re someone who likes to take things slow and pay attention to every detail, then super speed is the best option.

Mind control is better than super speed! While super speed can be useful in some situations, it ultimately isn’t as powerful as mind control. With mind control, you can literally take over someone’s body and make them do whatever they want. There’s no escaping from that kind of power. Super speed might allow you to outrun an opponent, but if they have mind control, they can just make you stop running. In the end, mind control is the clear winner in this debate.