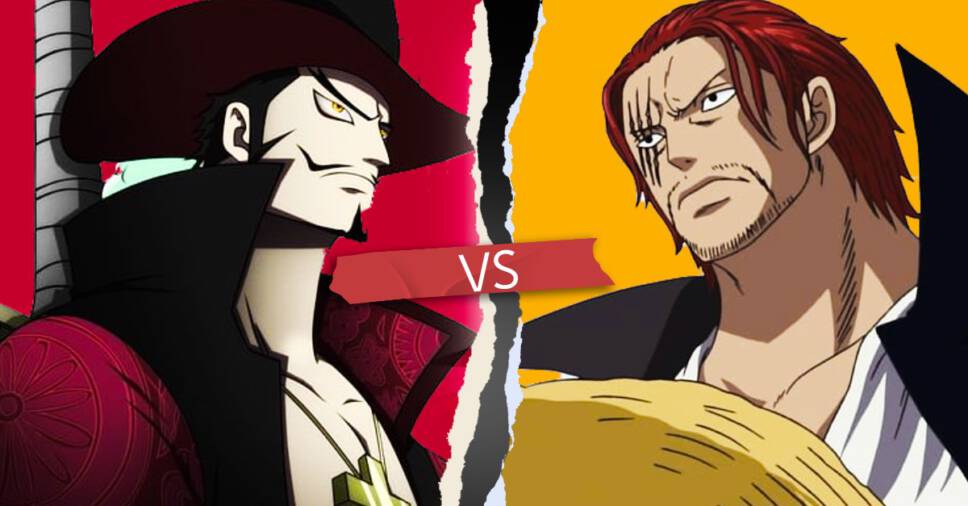 Mihawk vs Shanks, one of the most debated topics in the One Piece community. Shanks and Mihawk are some of the best swordsmen in anime, both are beloved and respected characters.

Mihawk vs Shanks: Who Wins?

*Spoiler alert if you haven’t watched the recent episodes of one piece or read the manga.

12 years ago Shanks dueled with Mihawk, they used to be rivals in the past, but they haven’t fought since. We don’t know who won that duel.

Whitebeard said that their duels were legendary, they shook the whole of the grand line and if any of the younger pirates would witness them they would pee in their pants. We didn’t get a chance to see the full potential, sword skills, and abilities of Shanks and Dracule.

Both characters displayed only a glimpse of their true powers. Okay, let’s analyze this.

Why Mihawk is Stronger than Shanks?

Probably the right answer regarding everything we know is that nobody knows the answer to this question but Oda. He clouds it in mystery. I believe it will not be settled until we eventually see both of them in action. Still, I feel the answer is pretty clear. Let’s examine this.

Mihawk is unrivaled as a swordsman. In terms of swordsmanship, we know for a fact that he is not only the “strongest swordsman” but one of the best fighters in anime.

For his ability to forge a black blade, this simply means Mihawk’s Haki is superior. No other confirmed Top tier in current One Piece has achieved this black blade. Mihawk never had a crew. Still, he went around the world defeating multiple powerful men. Mihawk is someone who is definitely Yonko level and is at least as strong as Shanks.

It was confirmed by Oda that there is no swordsman alive that is a stronger swordsman than Mihawk. Some arguments suggested that Mihawk views himself as inferior to Whitebeard, while Shanks was Whitebeard’s “equal”. However, this argument seems to be a classic “lost in translation”. Mihawk says there isn’t that much of a difference between him and Whitebeard.

Why Shanks is Stronger than Mihawk?

Shanks earned worldwide fame from his duels with Mihawk. His sword’s name is Gryphon and its meito is unknown. Eiichirō Oda described Shanks as a “swordmaster” in the databooks.

His swordsmanship is at the highest tier of sword skill. He is at his most powerful with his blade. Shanks could match a blow from Whitebeard with only one arm, which is a testament to his prowess in swordsmanship.

Mihawk was never the strongest swordsman in the world until he stopped dueling with Shanks after SPOILER*: Shanks lost his arm. Shanks has conquered Haki and we should safely say that he has the other two forms of Haki. According to the various Databooks and Vivre Cards: “Shanks was once as powerful as the world’s strongest swordsman (Mihawk)” Source.

Mihawk vs Shanks Who Would Win? Verdict!

If they fought for the title of the greatest swordsman, who would win? After examining all the arguments around the web and based on what we know so far as of June 16th, 2022, the power difference is small.

But! Mihawk is the superior swordsman. Until we see Shanks fighting without his sword, we’ll put Mihawk above him by the smallest margins since Mihawk is the WSS and shanks is a swordsman.

Even though we have no definite 100% answer, from our current knowledge, it makes sense they’re on equal terms regarding strength.

Mihawk vs Shanks: Who Wins? Vote Below