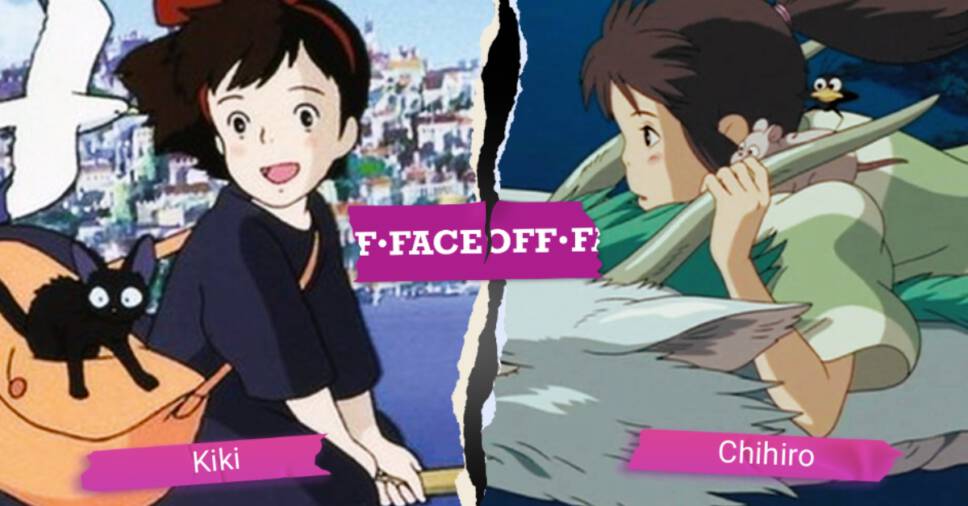 Miyazaki loves putting female characters (usually girls) in the middle of a conflict between the human world and the world of nature/spirit. Most of his movies feature strong female characters who demonstrate more strength and possess complex personalities.

Miyazaki’s movies emphasize the spiritual/magical and Power/Pleasure vs. Family. His characters are constantly put between powerful/pleasurable things and the ones they love most.

If you are a big fan of the Ghibli films, you may have watched Kiki’s Delivery Service” or “Spirited Away”, so you might have a tough time deciding which Ghibli movie is better?

Kiki is a thirteen years old girl who travels alone to a new city to test her skills. It is a real test of responsibility and independence, and if Kiki can handle it for a year, she will be ready to undergo the rest of her witchcraft education.

Kiki and her pet cat Jiji make their way to a big city by the sea. The city’s people have not seen witches for years. Kiki needs money to survive and she starts the kind of business most suitable for a witch who can fly on a broom: an airborne package delivery service.

As Kiki’s business becomes more and more successful, she meets various friends who each teach her important life lessons. At some point Kiki must lose her magic power, in order to regain them, she must grow and face her fears.

“Kiki’s Delivery Service” is a beautiful film about growing up into a responsible and self-confident young adult. It’s all about creating and finding motivation for joy in life is one of the most important things to do.

“Spirited Away”  is a Japanese animation movie depicting the adventure of Chihiro, a 10-year-old girl who has to navigate the spirit world to free her parents, working in a bathhouse run by an overlord called Yubaba.

Chihiro was just a normal girl, but when her parents transformed into pigs. Chihiro’s parents are slowly fading from existence in the living world. She must find a way to save her parents and escape.

She is trapped alone in a secret world full of mystical creatures and surrounded by strange and disturbing characters. The movie narrates Chihiro’s journey to find her way back home.

Chihiro is a character full of strength to make the right choice. She becomes a very brave young lady that pulls her weight to survive in a terrifying new environment, full of creatures that want to eat her because she is human.

Kiki’s Delivery Service vs Spirited Away Which Is Better? Vote Below

And still, Chihiro tries to learn and understand this mystical creature and finds an amazingly complex universe that gets enriched by her interaction with it.

The anime film is frequently ranked among the greatest animated films. It won the Oscar for Best Animated Feature at the 75th Oscar Award ceremony, making it the only hand-drawn animated film and Japanese animated film to ever win the best-animated film award.

At its greatest, “Spirited Away” is a remarkably distinctive story full of magic that could only ever truly exist within the boundaries of the Studio Ghibli style. It wonderfully captures the transformation of Chihiro from a child to an adult.

However, it is in what lies beyond these aesthetics, within the surreal storylines and caricatures, that we begin to discover the satirical edge which contributed to the gargantuan success of Spirited Away.