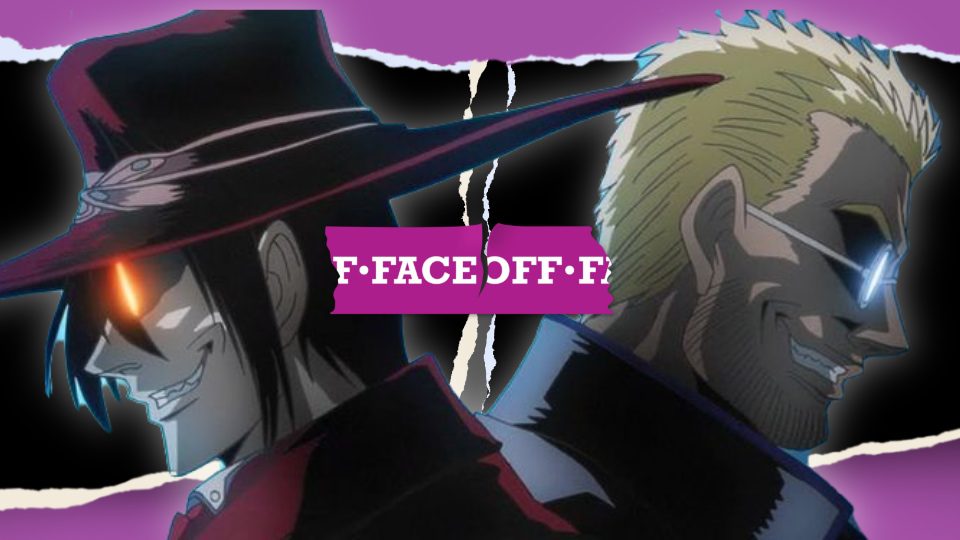 Today we are going to talk about one of the best vampire anime series ever created, Hellsing vs Hellsing Ultimate the OVA reboot. What comes to your mind when I say the word vampire? If you are familiar with pop culture, then the names Dracula and Alucard should pop up first. Kota Hirano is a famous mangaka known for his creation Hellsing. The anime series has a total of ten volumes that set the stage for modern vampire shows that takes heavy inspiration from this series.

A very common question that is asked in the anime community is which show is better? Should you watch the original or the reboot? And the answer is that if you want to deep dive into the story then you definitely should watch the original Hellsing series. But if you just want to see some vampires get blown to bits by Alucard, then Hellsing Ultimate should be your choice. With that being said, today we are going to deep dive into the highly popular Hellsing and Hellsing Ultimate to see what both shows are about and if you should actually skip the original or not.

Hellsing VS Hellsing Ultimate: Which is Better?

What is Hellsing about?

Our story starts when the Hellsing organization is called in to eliminate vampire threats to the villagers of Cheddar. The vampires were turning the people of Cheddar into ghouls. To put an end to this vampire threat, Sir Integra Fairbrook Wingates Hellsing, the leader of the organization calls in her best vampire hunter, Alucard.

Alucard is the OP MC who hides a single handgun with silver bullets that specialize in killing vampires. But during a fearsome battle, a young police officer named Seras Victoria gets caught up in the fight and is on the verge of death. Alucard takes pity on that girl and gives her the choice to die as a human or live on as a vampire and work for the organization.

Seras accepts his offer and begins her new life as a vampire in Hellsing. Even though she made that choice, the anime shows Seras struggling to accept the fact that she is no longer a human and is a beast of the night.

What is Hellsing Ultimate about?

Hellsing Ultimate is a reboot version of Hellsing that was aired in 2006 with 13 episodes. It follows the completed manga series of Hellsing while the original left us with an unfinished cliffhanger that didn’t quench our thirst for Hellsing. But no worries because Hellsing Ultimate gave us a masterpiece that we still talk about. Our story starts with the introduction to the existence of darkness and evil creatures that roam at night, devouring people unfortunate enough to be caught in their grasp.

I loved the fact that both Hellsing and Hellsing Ultimate gave us the most gruesome gory show with Alucard going on a rampage wherever he goes. I’m sure the show is pretty much on the top ten list of any gore anime fan even today. Alucard was made to be badass. He is a killing machine that does everything he is told. One of his famous personality traits is that he loves to play with his pray. He tortures them until their last breath. This trait of his actually made the viewers stuck to their chairs questioning themselves, what is Alucard going to do next?

Can we just agree on the fact that rich people have the best butlers? Walter is a character that is both chivalrous and badass at the same time. In both series, Walter has in my opinion the best character development as a side character. Walter is not only a butler that stays by Integra but he also creates badass weapons for the Hellsing organization. I should also say that Walter is also a very skilled fighter against the supernatural.

Then there is Integra, the cunning leader of the Hellsing organization that controls everything and everyone around her. After her father’s death, she followed her father’s advice and went into the secret chamber of the Hellsing house to discover Alucard. From then on, she worked herself to become the most powerful woman in the series. Both the shows Hellsing and Hellsing Ultimate have done a great job in portraying Integra’s personality.

There was one other thing they did differently in Hellsing Ultimate which actually hurt the quality of the show. They changed the personality of Seras Victoria in the reboot. Seras Victoria was a human who was turned into a vampire on the verge of death. In the original series, we actually see Seras fighting with her newly acquired vampire instincts and struggling to accept the fact that she is not human anymore. But in the reboot, we got a Seras Victoria that just accepted the fact that she is a vampire and became a typical every other girl in shonen shows. She lost the originality that made her a unique character in the anime.

Let’s talk about the villain Incognito that was anime exclusive for the original Hellsing show. Most of the time when a villain is exclusively made for an anime, it often turns out to be lackluster and boring but the Hellsing original actually made a very decent villain. Incognito was a villain that literally broke down the Hellsing organization to the point that Integra had to order Alucard to show us his worst side and we got to see an amazing final boss fight in the original show. I’m not saying that the Hellsing Ultimate series had a bad villain but this was one of the very few anime-only villains that actually was well made enough to get a mention. Hellsing ultimate had its own unique villains that kept us stuck to the edge of our seats with guys like Anderson, Major, and Schrodinger.

Though Schrodinger was mostly a comic character, still that slight comic relief actually helped us relax during all the action.

The major was a very devilish villain that the audience hated to the point that it is a success. Without spoiling anything, even I imagine how did the creator of the show think of such a villain that just wants to destroy everything.

Then there was the nemesis of Alucard, Anderson. Anderson really showed us how a villain should be portrayed as. But it was still somewhat lacking luster that Anderson chose to end his final battle the way he did. It could have definitely been done a better way in my opinion.

The difference between Hellsing and Hellsing Ultimate

The biggest reason for criticism between Hellsing and Hellsing Ultimate was probably because of its production and dedication to the animation. The original Hellsing was made during a time when animation quality was questionable. But still, we got other shows that proved to us that even with bad animation a show can be good. But not in this case. Hellsing creators were working with literally nothing to say the truth. The manga had not finished yet and they had to pump out more episodes for the viewers.

The show consisted of 13 episodes with 6 episodes of filler. Even the team was demotivated and did not put much effort into the original show. This was a big reason, many dedicated Hellsing fans actually advise new viewers to skip the original.

On the other hand, Hellsing Ultimate shocked everyone with its high-quality production and amazing animation. The animation was done by studio Satelight and Madhouse, two big names in the anime industry, and they delivered what the fans wanted. The show was well made for another reason. The manga had ended by the time the reboot was created and animators actually had resource material to work with instead of making random filler episodes as they proceeded. The Hellsing Ultimate was a far superior show in terms of following the main storyline and giving the show an amazing ending.

The Hellsing original did have one good quality that will make me remember it. The original show had an amazing soundtrack that gave us that nostalgic feeling. Not to say that the soundtrack of Hellsing Ultimate was bad but nothing beats the original opening of the show.

So, which one is better? Hellsing or Hellsing Ultimate?

Now that we have discussed in detail the pros and cons of both shows, we should now be able to tell you which show is better. Now let’s get a bit picky here. I felt that the Hellsing Ultimate series was initially very fast-paced based on you remembering the original show to get the full picture. The first four episodes feel like a bullet train and then the show slows down a little then picks back up.

Many people might be confused with this sudden rush and then slow down of the show, and I feel it could have been done in a better way. If you ask any fan, they will tell you that you can skip the Hellsing series and directly watch the Hellsing Ultimate to get the full experience and in my opinion, they are right for the majority of it.

Which is better? Verdict