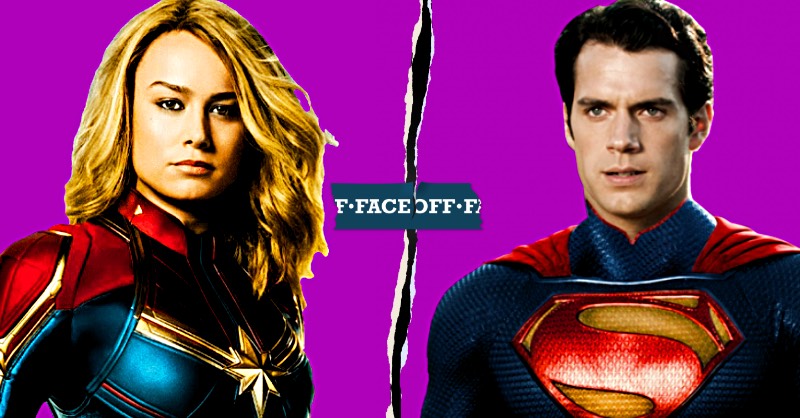 An epic battle between Captain Marvel and Superman is not only intriguing because the two are such powerful heroes in the DC and Marvel universes, but also because they share so many similarities. Both are popular and respected superheroes! Superman and Captain Marvel are both flying superheroes (even in space)! They share alien DNA. In addition, they both project massive energy blasts/rays, and finally, both are Guardians of Earth. They even wear the same blue colors! No wonder many people think that Captain Marvel is the Marvel equivalent of Superman. Here is who would likely win in a legendary fight between them.

The battle will is held on the top of Mount Everest. We’re not going to go into the whole comic book/MCU/DCEU versions of Captain Marvel and Superman. We’re going to assume that these superheroes can achieve similar feats on the big screen as they did in the comics. The combatants will be put through five excruciating rounds in the following parameters: Strength. Fighting Skills, Speed. Powers and Intellect. Whoever wins more rounds overall wins the battle!   Morals Off. Starts at 150 m.

How powerful is Captain Marvel?

Major Carol Danvers was a US air force officer and head of security at N.A.S.A. She was accidentally subjected to alien Kree technology, called the Light-Speed Engine that was powered by the Tesseract. The energy that radiated into Danvers mutated her on a genetic level, turning her into a Human-Kree Hybrid. It gave her cosmic superpowers.

While enveloping herself with cosmic energy, Danvers can fly at incredible speed, glide, and float through the air and the vacuum of space without outside help. Captain Marvel has Energy Absorption which makes her capable of absorbing most types of energy to temporarily enhance her own physical powers. She can fire powerful concussion blasts of photons from her hands.

Carol is also incredibly strong, able to support at least one hundred tons, as she was able to support the weight of a dead Celestial as one fell to Earth. Throughout the years we’ve seen Captain Marvel do some incredible feats of strength. Including deadlifting a train, busting through a Chitauri Leviathan, blasting Tony Stark’s armor off of him, and punching massive asteroids as a workout. She flew right through Intergalactic warships like a hot knife through melting butter! She took a power stone punch to the face and came back like it was nothing!

How powerful is Superman?

Superman’s power source is the yellow sun. Under the rays of a yellow sun Superman’s body acts as a living solar battery that fuels a variety of superhuman abilities. Superman flies up over the ground and fires up into space at will. He has laser vision, capable of melting solid rocks or entire buildings. The Justice League member has freeze breath, able to condense oxygen in his lungs to a pressurized and super-cold state. Using his X-Ray vision, he can scan buildings and any other object in his way. He is also amazingly fast. Superman moves at over 2000 miles/sec, which is also over 120,000 miles/minute, and also 7,200,000 mph! That’s Mach- 9350!!! That’s just barely under the Flash!

See also: Superman vs He-Man: Who is the most powerful man?

Here are some of Superman’s insane feats:

Superman was strapped to a machine that simulated Earth’s total weight, and he bench-pressed that weight for 5 DAYS STRAIGHT. Superman literally moved an entire solar system with his physical strength. He once punched with so much force that it literally shattered the boundaries of time and space. In addition, he also held a black hole in his clenched fist, trying to keep it shut. It was stated earlier in that comic that the black hole was powerful enough to take out an entire solar system. Superman has defeated Nebula Man, a living universe.

So, which one of these upper-level superheroes will win in a fight? With several parameters in mind for each of them, here are our thoughts on Captain Marvel vs. Superman, and who would win in a fight. As far as strength is concerned, Superman is more likely to outmatch Captain Marvel. Based on how their powers work, Captain Marvel is at maximum capacity with her abilities at all times, whereas Superman can only grow stronger the longer he is under a yellow sun.

Also, we already described some of Superman’s best feats of strength (like bench pressing the entire weight of the Earth) and we believe it is safe to say that he is at least a bit stronger than Captain Marvel. Captain Marvel has extensively trained in armed and unarmed combat thanks to her military background. Superman, on the other hand, was raised by two farmers, and while he still knows how to throw a punch, it might not be enough. So, we are going to give this round to Captain Marvel.

Captain Marvel vs Superman Round 1: Speed

As amazingly fast as Captain Marvel is, she’s actually moving at a snail’s pace compared to Superman. Her flying at roughly six times the speed of sound is not even close to the speeds Superman can fly under the Earth’s atmosphere (up to Mach- 9350, as we said). But that’s just travel speed. Meaning that’s how fast Superman can move from point A to point B. But not how fast he can punch. When he fought Flash in the Justice League movie his attack speed (the speed of his fists) was fast enough to catch FLASH off guard! Captain Marvel is able to go beyond light speed in space. But that’s just her flying speed. She can’t really punch all that fast. In fact, we believe what mainly sets these two combatants apart overall is just that – raw speed and Clark definitely takes that one.

Captain Marvel vs Superman Round 2: Intellect

Let’s be honest. Neither of these awesome characters is considered the smartest in their universes. Don’t get us wrong, both are still quite smart. It’s just that neither character relies too much on their I.Q. when solving a problem. It’s true that in certain storylines Superman is depicted as having a superior intellect (after all, genetically speaking, he’s descended from the genetically enhanced genome of a super-intelligent species).

Captain Marvel vs Superman Round 3: Powers

Because of his Kryptonian physiology, Superman has plenty of heroic abilities at his disposal. From flight to super-breath to super strength and more, the Man of Steel has quite the selection of abilities to assist him in a battle. Don’t get this wrong, Captain Marvel also has a wide array of powers at her disposal. However, Kree DNA, which is what gives her abilities, isn’t nearly as strong as Kryptonian DNA. Superman has more superpowers in terms of numbers, making him the clear winner in this regard.

Captain Marvel vs Superman: Who Wins?

There you have it! Superman wins all 3 rounds! We are not saying that Danvers can’t put a decent fight against Superman. She has photon blasts that could counter Superman’s heat vision. Danvers is arguably just as durable as Supes.

Captain Marvel exercises her many powers just as well. But winning the fight would be very difficult for her. In strength and speed, for that reason, Captain Marvel would lose in a battle against Supergirl as well. The Man of Steel has Captain Marvel outclassed. Even all Danvers’ power absorption won’t do her good against such a vastly superior opponent who can tank any blast she throws at him. She would give Superman a worthy fight, but in the end, Superman could take anything she could dish out, and give it back a thousand-fold.

1 thought on “Captain Marvel vs Superman: Who would win in a fight?”