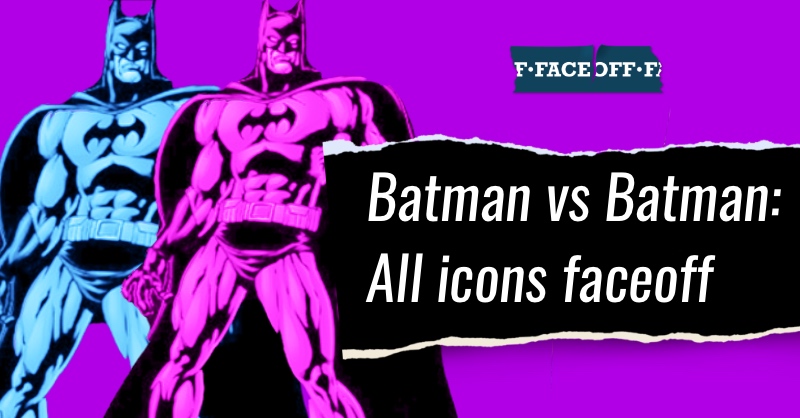 In this Batman vs Batman battle report extravaganza, we match up everything from Batmobiles, Batwings, and villains to find out who is the best. Batman is one of those rare characters audiences can’t get enough of.

Based on comic books published by DC Comics, The Dark Knight is one of the most commercially successful superheroes, and his image has been featured in various media, from live-action and animated TV series and movies like Justice League to toy lines and video games.

In this Batman Faceoff, fans will be put to the test as we bring them some questions that only true fans will be able to answer! So without further ado, let’s give it to the hero who has one power – he never gives up. Are you ready to Faceoff?

Despite having no superpowers, Batman is usually considered to be one of the most formidable heroes in the DC universe. Give him enough prep time, and he can win just about any battle.

In order to take on beings with strength superior to his own, Batman had, more than once, designed special armor shield suits aimed to provide him with a great deal of protection against physical damage.

Let’s test the best two armored suits against each other and see
which comes on top.

Batman vs Batman: The Batplane

Batman is a superhero with no powers. He uses technology to his advantage. True, Batman can’t fly, but he can fly the Batplane. The powerful aircraft has supersonic speed, allowing Batman to go full speed to the point of invisibility.

Batwing is actually a creation of Bruce Wayne as part of his Batman Inc. initiative to create a worldwide crimefighting network supported by Wayne Enterprises. Basically, it’s an Iron Man-like super-suit with a ton of gadgets. The Bat” from Dark Knight Rises was built as an aerial urban pacification platform.

There are many things wrong with the concept and the dimensions of the Bat. There are few things about it that are in the realm of reality, but like a work of fiction, it’s iconic.

Bruce Wayne’s butler. Alfred knows that Bruce is secretly Batman and aids him in his adventures. His many skills ranging from cooking to medicine, make him Batman’s staunchest ally. His formal demeanor deflects those who might otherwise suspect Batman’s true identity.

He is the police commissioner of Batman’s home of Gotham City. He shares the hero’s deep commitment to ridding the dark and corrupting city of crime. Sometimes he is skeptical of Batman’s vigilante method but recognizes the necessity of Batman and the two having mutual respect and tacit friendship.

The Batmobile was cleverly designed by Batman to assist him in his masked vigilante activities. It is Batman’s personal automobile and primary way of transportation.

The batmobile has appeared in almost every Batman iteration, including comics, movies, and video games. It has since gone on to be a pop culture icon.

Over the years, the Batmobile has sported many special gadgets and special fixtures.

The Batman Who Laughs

He is Batman’s greatest fear! The Batman Who Laughs has all the same abilities and training as Batman. He is an extremely dangerous villain. Even more dangerous than the Joker, something distorted that should not be allowed to exist.

He is so dangerous that Lex Luthor, the smartest man on Earth, built a special prison just for him with the help of the greatest magicians and with the technology from the future.

Not to be confused with Nite Owl Thomas Jr. became the masked vigilante known as Owlman. He decided from a young age that the world needed to be cleaned up and to achieve this goal, he had his parents and brother, Bruce Wayne, murdered.

Owlman has peak human strength, speed, and durability. Heis a skilled hand-to-hand combatant. He is also a super-intelligent villain who was created as an evil counterpart to Batman. He terrorizes the streets of Gotham along with Mob boss Gordon.

Owlman has enhanced his natural abilities with various devices that increase his natural power to far greater levels than attainable by his own power level.

Batman vs Batman: The Rogues Gallery

Dr. Jonathan Crane, otherwise known as Scarecrow, is a character based on fear. What makes him dangerous is his ability to generate in purest form every man and woman’s greatest weakness: fear.

In most adaptations we see him in, he is shown to be a scientist focused on the question of fear: what helps drive it, how people are motivated by it, how to cause it, and stuff like that. He is also a complete sadist.

Scarecrow might even be a psychopath. He is completely indifferent to the suffering of others and relishes only the topic of fear and how he could torment people.

The good-looking man and “White Knight” that Gotham deserved became “Two-Face” when acid splashed on his head. That changed everything. Now he is obsessed with two things: duality and justice. Two-Face is a tormented and serious villain.

Representing a basic criminal mobster-type character but also bringing his unique mental quirks. He makes his decisions with a coin flip and sometimes ends up actually assisting Batman because of this.

Two-Face is less destructive than the Joker and is less obsessed with Batman, making him less of a priority for the Dark Knight in terms of who his arch-nemesis should b what with his obsession. He is a character like Batman, most of the time. Mostly because Batman gets in his way, and interferes with his plans.

Poison Ivy looks like a human, but she is a metahuman who is part plant. She was once a botanist who underwent a horrible accident and become a half-plant. She is psychically capable of communicating with the Green, the natural life field of all plant life on the planet. And, additionally, the Green speaks back to her.

She’s an inherently evil character because she’s inherently evil. All her actions can be rationalized and Batman understands her point of view but doesn’t agree with how she goes about getting her point heard.

Poison Ivy’s most long-standing power is using her pheromones to control other people’s minds. I don’t think you could possibly come up with a perfect example of violating the physical and emotional rights of others.

The classic Ivy is an extreme misanthrope who hates humanity and wishes to see it purged from the planet.

Originally a psychiatrist, Dr. Harleen is a unique character. She treated the Joker, believing she could cure him. Harleen wanted to understand what brings men to violence, but could only find who brings her to violence.

When The Joker pushed her into a chemical bin she transformed and became the criminally insane villain, Harley Quinn. Let’s just say she is a complex character that is completely unpredictable. She can be badass one moment and be completely human the next moment.

She is a manifestation of every dark girl. That is what makes her relatable to all comic book fans. I find her fascinating. Harley Quinn is equipped with super strength, super speed, an all-female superhero team, and durability. In addition, she is immune to toxins – This is where Harley really shines! She has almost complete immunity to (almost) all toxins.

The notorious short character, Oswald Chesterfield Cobblepo has a criminal mind. He is a hideous mutant who lives in the sewer and is a slightly reformed entrepreneur. He is known for being quite wealthy in Gotham. Most of his goons are likely working for him because it’s good to pay, good enough pay that they’re willing to risk getting beat up by Batman.

The Penguin is mostly motivated by money and the trappings of wealth. He showed his shrewd business skills by taking out the other mob bosses.

The Penguin has limited fighting skills and relies mostly on trickery and his goon squad. He has some chemical knowledge and mechanical skills just to make up his weapons.

A DC villain that was practically made to challenge Batman’s critical thinking skills. The Riddler is a resourceful crime-based character with clear motivations as his narcissism.

He is a very intelligent and sophisticated manipulator and an arranger. Riddler prefers to outsmart the authorities over killing people.

However, he is capable of violence. The Riddler is smarter than the average foe and one of the few villains whose plans actually work! Riddler mostly uses his smarts for personal gain and wealth, he completely lacks empathy or morals.

Riddler may be a genius, but Batman’s even smarter, making Riddler quite unsuccessful. the Riddler being a serial killer in The Batman (2022,) is an interesting way to portray him, Batman has such a diverse cast of antagonists!

1 thought on “Batman vs Batman: We face off all icons against each other!”